SEATTLE, Wash. – August 19, 2020 – Minority suppliers are in a healthier financial position and are more resilient than their non-minority supplier counterparts, according to a new predictive analytic modeling study conducted by Rebirth Analytics and the Northwest Mountain Minority Supplier Development Council (NWMMSDC).

An analysis of over 300 privately held minority suppliers across seven states representing over $8.1 billion in gross revenue revealed that minority suppliers are outperforming both their publicly-traded and privately-held counterparts. The study, which compared private companies to their industry peers leveraging financial information from corporate balance sheets and financial statements, focused on 12 industries, including manufacturing, technology, mining, professional and scientific services, among others. NWMMSDC defines minority suppliers as companies owned, operated, and controlled by at least 51% Asian, Black, Hispanic, or Native Americans.

“Financial Health metrics are the best indicators of how a supplier will perform through disruptive market events, like the COVID-19 pandemic, and our study reveals that minority-owned businesses are displaying extremely high levels of resiliency through the crisis, and should emerge in a stable position post-crisis,” said Chonchol Gupta, CEO of Rebirth Analytics.

The context of the study’s findings is also relevant to government agencies, which have reported an under-representation of minority companies accessing the Small Business Administration’s Paycheck Protection Program (PPP) loans.

“Minority suppliers account for $14.6 billion in economic output, 90,352 jobs, and over 47,000 ethnic minority jobs, but 4.9 out of 10 minority suppliers who applied for PPP loans were denied,” said Fernando Martinez, president and CEO of NWMMSDC.

Despite the perception that minority suppliers are unstable through changing economic conditions, the findings offer a stark reminder that minority businesses are operating with resiliency and can continue to be relied upon by the large enterprises they service.

“In terms of revenue growth, minority suppliers in 10 out of the 12 industries we analyzed outperformed their non-minority privately-held peers, as well as their publicly-traded peers in three sectors – manufacturing, construction, and technology,” said Gupta.

“Increasing year-over-year revenue growth indicates that the minority suppliers are picking up more contracts and playing a more significant role in the companies they service, which in the Northwest include corporations such as Boeing, Costco, Microsoft, Nike, Starbucks, and T-Mobile,” said Martinez.

Rebirth Analytics and NWMMSDC are enthusiastic about the initial findings and have commissioned additional analysis to layer other elements such as credit scoring, access to capital, and large enterprise employment of minority suppliers into the study. For more information and to obtain a copy of the initial findings, contact info@rebirthanalytics.com.

Founded in 2018, Rebirth Analytics provides evidence-based protection and visibility into an organization’s supply chain risks. We do this by aggregating data across six different risk categories and deploying the results to decision-makers almost instantly. Our integrated platform incorporates proprietary AI, enterprise-to-supplier specific views and externally validated data to provide users clarity on where risk may lie. Through our partnerships with Microsoft, IBM, and ESRI we deliver a single solution package that benefits a wide variety of sectors including manufacturing, retail, finance, insurance, hospitality, nonprofits and more. With customers throughout the world, Rebirth Analytics is a private company with offices in the U.S. and UK. Visit rebirthanalytics.com for more information or follow us at LinkedIn or Twitter.

By John Lewis | Mr. Lewis, the civil rights leader who died on July 17, wrote this essay shortly before his death, to be published upon the day of his funeral.

While my time here has now come to an end, I want you to know that in the last days and hours of my life you inspired me. You filled me with hope about the next chapter of the great American story when you used your power to make a difference in our society. Millions of people motivated simply by human compassion laid down the burdens of division. Around the country and the world you set aside race, class, age, language and nationality to demand respect for human dignity.

That is why I had to visit Black Lives Matter Plaza in Washington, though I was admitted to the hospital the following day. I just had to see and feel it for myself that, after many years of silent witness, the truth is still marching on.

Emmett Till was my George Floyd. He was my Rayshard Brooks, Sandra Bland and Breonna Taylor. He was 14 when he was killed, and I was only 15 years old at the time. I will never ever forget the moment when it became so clear that he could easily have been me. In those days, fear constrained us like an imaginary prison, and troubling thoughts of potential brutality committed for no understandable reason were the bars.

Though I was surrounded by two loving parents, plenty of brothers, sisters and cousins, their love could not protect me from the unholy oppression waiting just outside that family circle. Unchecked, unrestrained violence and government-sanctioned terror had the power to turn a simple stroll to the store for some Skittles or an innocent morning jog down a lonesome country road into a nightmare. If we are to survive as one unified nation, we must discover what so readily takes root in our hearts that could rob Mother Emanuel Church in South Carolina of her brightest and best, shoot unwitting concertgoers in Las Vegas and choke to death the hopes and dreams of a gifted violinist like Elijah McClain.

Like so many young people today, I was searching for a way out, or some might say a way in, and then I heard the voice of Dr. Martin Luther King Jr. on an old radio. He was talking about the philosophy and discipline of nonviolence. He said we are all complicit when we tolerate injustice. He said it is not enough to say it will get better by and by. He said each of us has a moral obligation to stand up, speak up and speak out. When you see something that is not right, you must say something. You must do something. Democracy is not a state. It is an act, and each generation must do its part to help build what we called the Beloved Community, a nation and world society at peace with itself.

Ordinary people with extraordinary vision can redeem the soul of America by getting in what I call good trouble, necessary trouble. Voting and participating in the democratic process are key. The vote is the most powerful nonviolent change agent you have in a democratic society. You must use it because it is not guaranteed. You can lose it.

You must also study and learn the lessons of history because humanity has been involved in this soul-wrenching, existential struggle for a very long time. People on every continent have stood in your shoes, through decades and centuries before you. The truth does not change, and that is why the answers worked out long ago can help you find solutions to the challenges of our time. Continue to build union between movements stretching across the globe because we must put away our willingness to profit from the exploitation of others.

Though I may not be here with you, I urge you to answer the highest calling of your heart and stand up for what you truly believe. In my life I have done all I can to demonstrate that the way of peace, the way of love and nonviolence is the more excellent way. Now it is your turn to let freedom ring.

When historians pick up their pens to write the story of the 21st century, let them say that it was your generation who laid down the heavy burdens of hate at last and that peace finally triumphed over violence, aggression and war. So I say to you, walk with the wind, brothers and sisters, and let the spirit of peace and the power of everlasting love be your guide.

John Lewis, the civil rights leader and congressman who died on July 17, wrote this essay shortly before his death.

Written in the New York times: 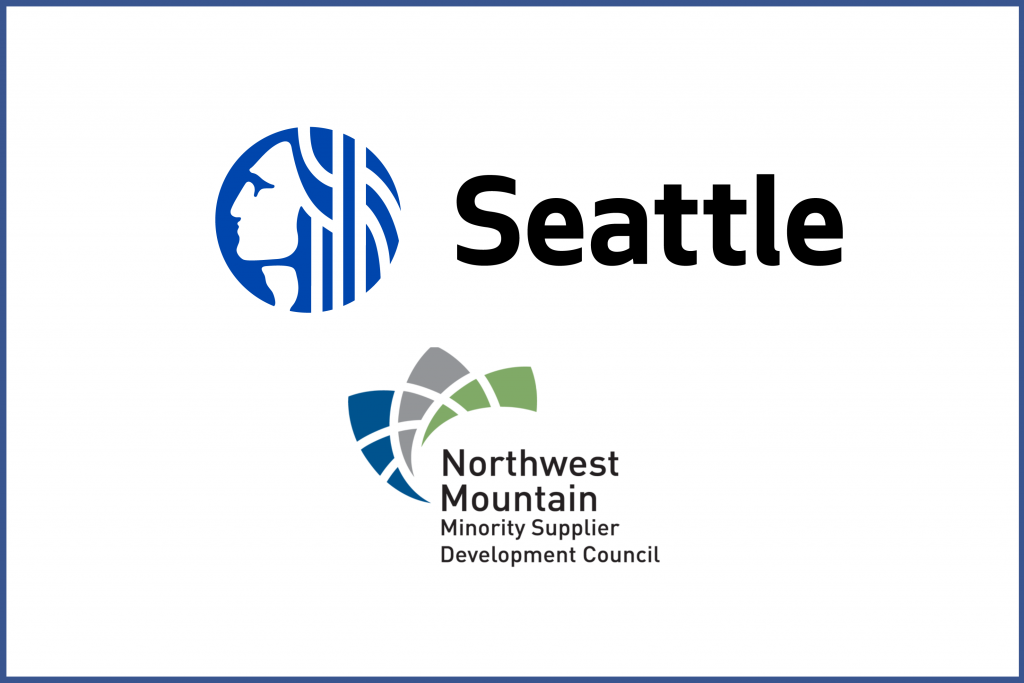 Fernando Martinez, President and CEO, and Zavere Weeks, Program Assistant of the Northwest Mountain MSDC met with the City of Seattle to discuss the Technical Assistance Program. Please find the presentation linked below.

This is the beginning of a path to Equity! Click on the link below for a look into the Council’s commitment to business equity for MBEs by Fernando Martinez, President & CEO. 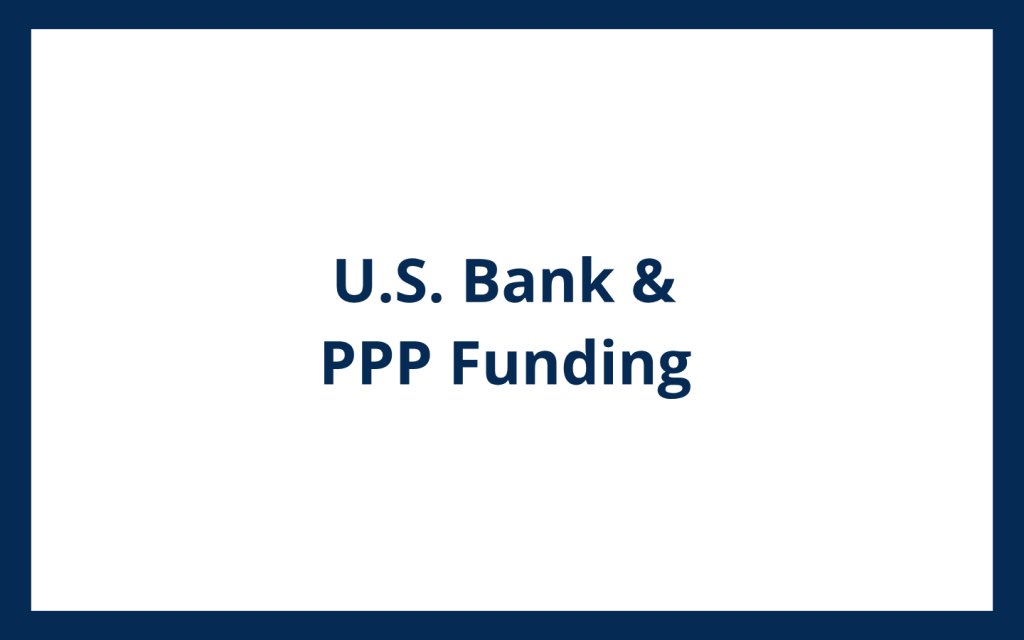 U.S. Bank, member of the NMSDC, continues to provide Paycheck Protection Program (PPP) funds. If you are still interested in applying for PPP funds, please read the attached press release for application instructions (see below).

Seventy-five percent of our Council MBEs that have applied for PPP funds have received financial support. If you have not applied for PPP funding, please consider doing so. The net effect is that you are eligible to receive two months of forgivable wages and salaries, plus some mortgage, lease, and utility support.

US Bank is accepting new applications online through June 19.

We accept applications for customers nationwide and for non-customers in states where we operate branches. If you know of a small business that may be interested, please share the attached information with more details on the programs. Small businesses can also visit usbank.com/ppp for more information or to apply.

What is the program?

The PPP is a potentially forgivable loan that helps small- and medium-sized businesses impacted by COVID-19 to cover payroll and other eligible non-payroll costs. For more information, please visit usbank.com/ppp.

Congress made substantial changes to the forgiveness rules and repayment terms, most importantly:

Businesses have until December 31, 2020 to return to pre-COVID levels of employment and exemptions for some businesses who have had to reduce employment levels due to certain regulations.

If a business applied and received funding already, the changes apply to most existing loans as well, notwithstanding the loan agreements.

The Northwest Mountain MSDC hosted a series of free online workshops for businesses interested in doing business with the City of Seattle as part of the Technical Assistance Services program. This series included insight from industry experts and open discussions on a number of topics. Missed these workshops? Click on the attachments below to review any or all of the presentations. This series will be repeated in the summer, so let Zavere Weeks, Program Assistant, know if you are interested in registering! 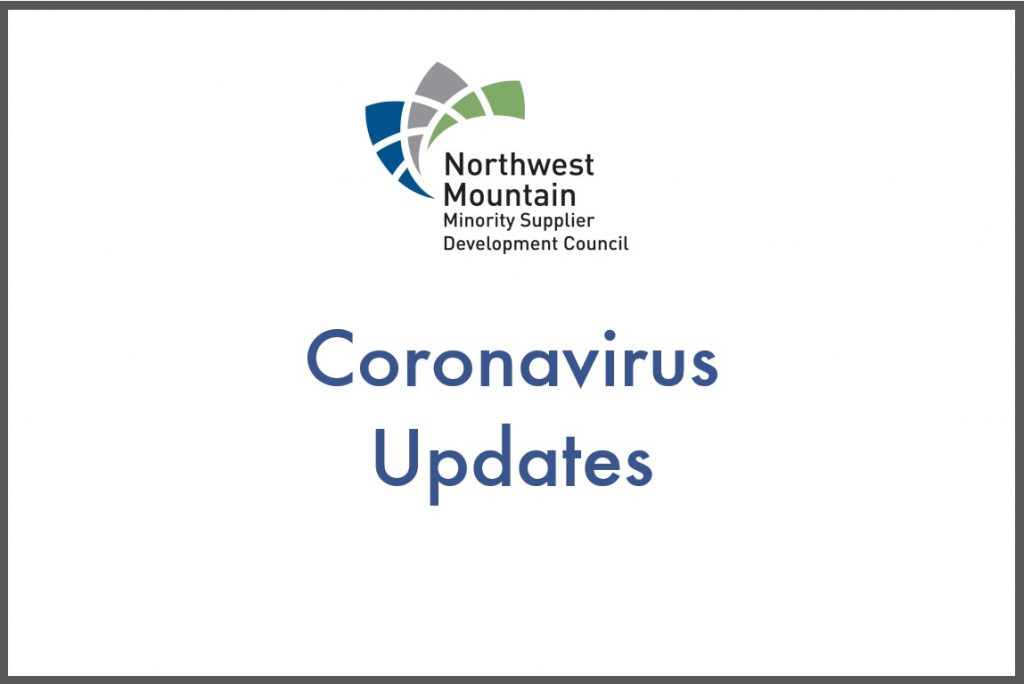 The Coronavirus Aid, Relief, and Economic Security (CARES) Act allocated $350 billion to help small businesses keep workers employed amid the pandemic and economic downturn. Below are a couple of guides with information to help you choose which option is best for you and your business.

As we face hardships from the Coronavirus Pandemic, it is necessary to support our teams. Below are some tips for employers to share with their staff regarding things to think about as we move forward in combating these new and unprecedented challenges. Thank you to Tim Otani of Union Bank and NWMMSDC board member for the valuable pointers.

Visit your State Sites for updated information and support:

It is important to create a business strategy to help mitigate some of the offsets caused by the Coronavirus Pandemic. Below are ten recommendations by Reggie Brown, lecturer for the University of Washington Foster School Consulting and Business Development Program, to help you plan and not panic.

10 Considerations for Managing Your Business Through a Crisis

Visit your State Sites for updated information and support: